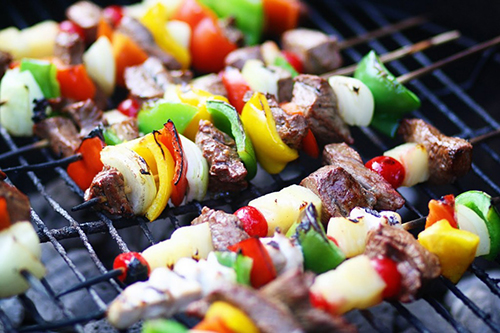 With the summer months quickly approaching, many Americans are firing up their grills with their favorite foods. While it was once thought that grilling food was a fool proof healthy cooking method, more recent research suggests that certain precautions must be taken to ensure a healthy meal. When meat is cooked at high temperatures (such as when grilling) carcinogenic substances called heterocyclic amines (HCAs) and polycyclic aromatic hydrocarbons (PAHs) are formed. PAHs are formed both when meat is cooked due to the reaction between the amino acid creatine and sugar found in meat. PCAs are formed when the fat and juice from meat drip, creating smoke which then sticks to the surface of meats. Grilling vegetables and other non-meat foods do not form HCAs and PCAs. While it is not necessary to cancel this summer’s barbeque plans there are some small changes you can make to ensure healthier grilling.

Have a Healthy Halloween!

Food Dyes: Are they safe?

The Do’s and Don’ts for Dealing with Picky Eaters