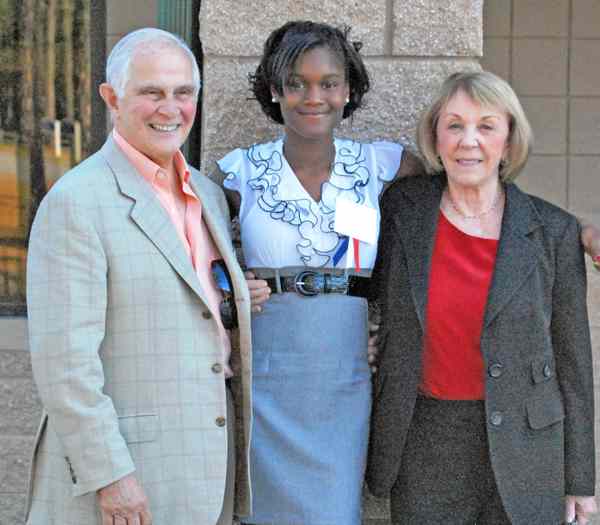 The Nuzzo, Holmberg, and Bradshaw Scholars are selected based upon the students’ demonstration of scholastic ability, leadership potential and strength of character.
The scholarship process included an extensive application with essays and an interview with members of O’Neal’s Board of Trustees and O’Neal’s Headmaster, Alan Barr.

The Helen Pringle Holmberg Scholarship is given in honor of Helen Holmberg, an O’Neal graduate and the School’s first John Motley Morehead Scholarship recipient. Helen’s father, the late Centre W. Holmberg, Jr., served as chairman of O’Neal’s Board of Trustees. Current O’Neal students as well as students from other schools are considered. Margaux Winter, daughter of Dr. and Mrs. James Winter of Southern Pines, becomes the fifteenth Holmberg Scholar. Margaux is a current O’Neal student. Margaux volunteers for many efforts in the community such as Boys and Girls Club, Sandhills Children’s Center, and playing the piano for many fundraising efforts in the area. She has participated on the varsity cheerleading team as well as the middle school golf team in addition to other sports held outside of school. She has won numerous awards and recognitions in writing as well as in other academic and fine arts areas.

The Nuzzo Family Foundation Scholarship is given by Mr. and Mrs. Sal Nuzzo in honor of Father John Nicola, a retired priest who was a beloved Latin teacher at O’Neal. Students not currently enrolled at O’Neal are considered. Destiny Gibson, O’Neal’s fourteenth Nuzzo Scholar, is the daughter of Tamikia McCall of Laurinburg. Destiny is active with her church and its volunteer efforts in the community and served in it’s youth gospel choir. She has participated in Project Quest a math and science program hosted by the School of Math, Science and Technology (MST). She serves as a peer mediator for G.R.E.A.T – Gang Resistance Education and Training promoting anti-bullying awareness and peer acceptance. She has participated in her school’s cheerleading team as well as soccer and track and field. Destiny comes from Spring Hill Middle School.

The Hannah Marie Bradshaw Scholarship is given in memory of Hannah Marie Bradshaw. Hannah spent half of her life as an O’Neal student and she loved the School as a positive place that helped her reach her true potential. Students not currently enrolled at O’Neal are considered. Trey King, the eighth recipient of the scholarship, is the son of Colonel and Mrs. John King of Aberdeen. Trey has been very active with Boy Scouts of America as he as moved from state to state as part of a military family. Trey is one rank away from achieving the highest rank – Eagle Scout. Trey comes from Southern Middle School.

Applications for these scholarships are accepted at the beginning of each calendar year. They can be obtained by visiting The O’Neal School website.

An independent, college preparatory school for pre-kindergarten age 3 thru grade 12, The O’Neal School is dedicated to the development of academic excellence, strength of character, and physical well-being of its students. O’Neal prides itself on having 100% of its graduating seniors receive acceptances to colleges and universities throughout the nation. The O’Neal School is currently accepting enrollment applications for the 2013-2014 school year. For more information, contact Alice Droppers, director of admissions at (910) 692-6920 or go to www.ONealSchool.org.

You can now signup online for birthday parties at Sandhills Gymnastics!