Merriam-Webster defines strategy as “a careful plan or method.” It is also “the science and art of military command exercised to meet the enemy in combat under advantageous conditions.” These are truly important skills that we want our kids to learn. But how in the world do we teach them? Teaching a kid strategy isn’t something that can be done with systematic steps. Luckily for them, teaching kids the important lesson of how to strategize is best done with a board game.

The first board games that we play with our kids are of the “luck” variety – candy land, chutes and ladders, high ho cherry-o. These are games where you pick a card, flick the spinner, or roll the dice. They are great for teaching important lessons like number or color recognition, counting, following directions, taking turns and good sportsmanship. These games also get rather boring after a while. Kids enjoy the luck aspect of it, but as a parent, there is no challenge to them. Once they start to get into kindergarten, it feels like the best we can do when playing those games is to encourage our kids to not be sore losers and to accept that once in a while they are going to lose a game. This concept by itself is a tough pill to swallow in my house, but I digress. Then this amazing thing happens – they get older and the games start to get more challenging. Rather than just playing games of luck, they start to actually play games that require some skill.

A strategic game is one in which “the players decision-making skills have a high significance in determining the outcome.” I found a game for J that she loves that has made teaching strategy relatively easy and it is a great game of American geography. I bought the game from a sample sale (no recollection which one), but you can buy it on Amazon. 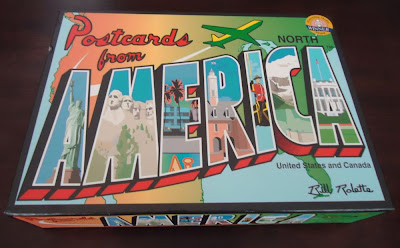 So the idea with this game is that you are given 5 postcards to start with and need to travel across the United States in order to visit the location and “flip” the card over. Each time you flip a card over, you get another, and the goal is to be the first to flip 10 different postcards. The board has landmarks and cities that you travel to and colored paths that you have to follow. There is no “start” location on the board, but rather, you look at your first five cards and decide which city would be the best place for you to start. For this reason, every game is different because your path depends on the postcards that you pull from the deck. You move around the country, and the lower portion of Canada, by rolling dice with colors and airplanes on them. 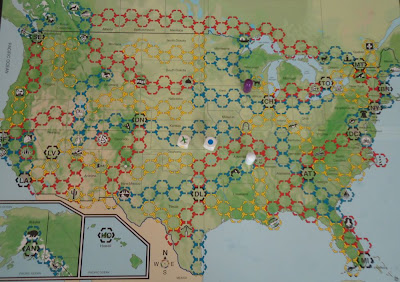 When J first started playing, she would start on the city that she liked the most, not necessarily the city that made sense for the cards that she had. She would then randomly decide to travel from one landmark to the next and would be frustrated when the adult playing with her would rack up the 10 postcards first. It was often things like picking Kennedy Space Center just because she likes space even if she had a bunch of cards together in the Pacific Northwest. I quickly decided that this would need to be the time that we discussed strategy.

In one of our many marathon sessions of the game, I walked her through a way to look at her cards, organize them and then plan her moves. So rather than haphazardly placing her cards in front of her, she now takes her five cards and organizes them by location – east coast, west coast and in the middle. She still gets excited when she gets cards of favorite locations like NYC, Los Angeles, the Monterey Bay Aquarium and Kennedy Space Center, but she also has discovered that there are some spots, especially on the east coast, where you can quickly rack up postcards if the luck portion of the game is on your side. She has gotten quite good at moving across the board and only every once in a while to I ask her if she really wants to make various moves. She has also learned a lesson about making it harder for your opponent to flip a card – since there is the option to steal a competitor’s card if you roll double blacks, she has learned to not only pick the postcard that could help her, but to aim for the one you seem to be headed towards. 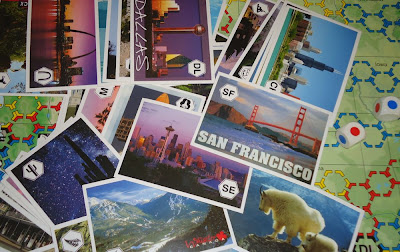 I’m a big fan of board games (and card games, puzzles, logic games, etc) so these are fun things for us to be able to play together. We have a few other games we really love these days, but we are always looking for more. Do you have any games that you really like to play?

10 Ways to Prepare Your Child for School

A Mighty Girl (and boy)