It’s beginning to look a lot like Christmas here in the Sandhills. But in our house, and a small grouping of other homes in the area, the familiar green and red is replaced by the blues and silvers of Hanukkah. Hanukkah is a relatively unimportant holiday in the Jewish religion, but due to the immense commercialization of Christmas, it has taken on a much larger role in the hearts of Jewish children. Like most things, this has good and bad points. On the bad side is that a holiday that traditionally has nothing to do with gifts now has them. On the good side, the story of Hanukkah has really wonderful lessons for all children to know.

So what is Hanukkah? The word Hanukkah actually means “dedication” in Hebrew and has to do with the destruction and rededication of the second Temple in Israel. In the second century B.C.E. King Antiochus III allowed the Jews living in Judea to practice their own religion. When his son Antiochus IV came to power, however, he was not as considerate and outlawed the Jewish religion. He demanded that the Jews bow down to Greek gods and punished them for studying Torah – the dreidel game associated with Hanukkah is actually based on tops that Jews would play with in case the Greeks tried to catch them studying Torah. When the Jews refused to give up their religion, Antiochus sent his soldiers to Jerusalem, massacred thousands of people and desecrated the city’s holy Second Temple by erecting an alter to Zeus and sacrificing pigs within its sacred walls. A large scale rebellion broke out under the command of Judah Maccabee (“the hammer”) and the less powerful Jews successfully drove the Syrians out of Jerusalem. The Jews then cleansed the Second Temple, rebuilt its altar and lit its menorah – a gold candelabrum whose seven branches represented knowledge and creation and were meant to be kept burning every night. There was only enough oil to keep the candles burning for one night, but the miracle was that it lasted for 8 nights, leaving time to get fresh oil. This miracle inspired Jewish sages to have the celebration of the temple’s rededication for 8 nights and inspired a special menorah specifically for the holiday. 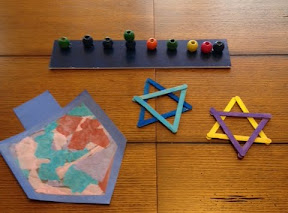 Okay, so that was a nice history lesson, but why is it an important story? Christmas is everywhere. All of the stores start pushing it the moment Halloween is over, let alone Thanksgiving. The schools use icons of Christmas to get kids excited about their lessons. There are a lot of really beautiful things about Christmas – the lights, the family togetherness, the spirit of giving (even if it often feels more like a spirit of getting). But as Jewish kid, it can be overwhelming. It is one of the few times of the year, along with Easter, that you really feel the power of being different. Being different isn’t a bad thing, it is just hard for small children to understand it. We have really strived to teach our kids about the meanings behind the holidays and this year J is old enough to really understand it and delve into the history. So when she came home from school one day saying that she didn’t like Christmas, I reminded her that Hanukkah is really about allowing everyone to have their own religion. Also, being different means that she can have fun teaching her friends about her own traditions. Not everyone gets to spin the dreidel and light the menorah. We share in the fun of going Christmas caroling with friends and she teaches her friends to play dreidel. It is a win win situation.

In our house, we have two very different perspectives on Hanukkah. I grew up with the tradition of getting a small gift every night and my husband grew up with no gifts. We try to meet somewhere in the middle and aim to make Hanukkah gifts more about continuing their Jewish education. I’m beginning to run out of stuff until J starts learning Hebrew next year, but we still keep it relatively small and limit it to one gift a night. Most importantly, we have gotten into the holiday spirit and continue to make Hanukkah decorations for the house, listen to some great Hanukkah music, read our Hanukkah books, play dreidel, and J is looking forward to the day when I come to her class to share our holiday with her friends. Once a year, we rededicate our house as a place of knowledge about this day in Jewish history and remind ourselves what the letters of the dreidel tell us – Nes Gadol Haya Sham, a great miracle happened there. 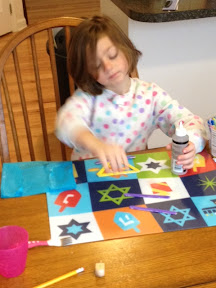 If you would like to get into the spirit of Hanukkah, here are some great songs to listen to.

How the Remote Controls Us

A Mighty Girl (and boy)